Welcome to my blog! Today’s article is about the Gort Railway Station. The Railway Station was first opened in 1869, and as this year is 2019, it’s the 150th anniversary!

I volunteer at the Kiltartan Gregory Museum, and to learn more about Lady Gregory, Yeats, and local history, I read a book written by Sister DeLourdes Fahy called Kiltartan, many leaves one root. It was in that book I learnt about the Railway Station and some of its history.

When did it all start?

Quoting from the book : ( I typed it via Google Voice, instructions here) It all started when William Gregory M.P. and his friend, Sir Colman O’Louglin, M.P. for Clare had spoken for many years about the advantages of having a railway to link Ennis with Athenry. Eventually, the first sod of the Western Line was cut at Ballyline, six miles north of Ennis and by February 1864, £ 52,000 was spent. The earthworks on the Ennis -Gort section were well advanced but less has been executed between Gort and Athenry. The work was suspended, temporarily, in October 1866 because Munro, the contractor, claimed London financial Association Ltd withdrew facilities when he was three quarters way through the work it should not complain it was like a landlord on his tenant cutting green core. The work which was at a standstill for over a year was resumed with the aid of £20,000 government loan and the final £40,000 of £60,000  loan was received in 1868.

The main earthworks were situated at Corker and in the vicinity of Ardrahan and Athenry. Baldwin’s house had to be demolished because It lay in the projected path of the Railway and, consequently, the family was transferred to Caheravohanaun/Balllyaneen. The railway stations were built according to “Rigid Economy”.

I went to the Gort Library to find out if I was able to find articles/pictures about the official opening. I found some articles, but nothing specific about the actual opening. The librarian mentioned she knew the son of the last station master, so I gave her my number, in the hope he would contact me. More about that later:)

I then went to a Facebook group called Gort, Kilmacduagh, Peterswell & surroundings Genealogy,DNA & History with lot’s of helpful members that have access to other sources, and very quickly I had a number of articles!

Here is the job add for Traffic Superintendent – check out his wages!

Cost of a Ticket

I can’t quite decipher the fares, so I am using the info from Sister DeLourdes book that says that a first-class ticket from Ennis to Gort cost Three Shillings; a second class was two shillings and a third, and third-class one shilling, which was quite prohibitive when one considers that  a labourer’s daily wage was seldom more than sixpence. The journey took one hour but a certain traveller complained that at a speed of 18 m.p.h. was “alarmingly” rapid 🙂

The Official opening in 1869

Prior to the official opening, Gort was privileged to have the then Lord Lieutenant and Countess Spencer use the railway line. They even stayed in Gort for the night at Lough Cutra with the Goughs. Reading the article, there were placards all over the town of Gort to spread the news of the opening of the Railway and the town was exceptionally well decorated. It looks like that 150 years later, nobody remembers the history of the railway line.

Steam Train out of the Book : Gort Inse Guaire – a Journey through Time

After the bankruptcy of the first contractor, there were more money issues ahead. Another book I consulted is the Gort Inse Guaire – a journey through Time. This book talks about the three engines ( Drumconora, Lough Cutra and Gort), and how on several occasions (!) the bailiffs came to Gort to seize/impound the engines, as there were outstanding debts!

But this was not the end…..

Reopening of the Railway Station in Gort in 2010

After a gap of more than thirty years, train services between the cities of Galway and Limerick commenced on Tuesday the 30 March 2010, on budget at a cost of €106.5m, a figure which included building new stations in Sixmilebridge and Oranmore. Check out this website with some fascinating images of some of the work that was done prior to the reopening.

The service provides five trains per day between Galway and Limerick. It serves existing stations at Limerick, Ennis, Athenry and Galway, as well as new stations at Sixmilebridge, Gort, Ardrahan and Craughwell. The Limerick to Galway service also feeds into expanded intercity services between Limerick and Dublin and between Galway and Dublin. Iarnród Éireann planned for both routes to gain hourly services at peak and two hourly off-peak, however recession ( at the time) has resulted in a delay, with some services withdrawn. I was hoping to get more info on the Transport21 program, but it looks like this website http://www.railusers.ie hasn’t been updated in a while:)

Fast forward to 2019, there no longer is a recession, and heading into Galway is serious gridlock, morning and evenings!! There has been a healthy uptake of the train, particularly for students who are commuting to the universities and colleges in Galway. There are also trips from Dublin to Galway on the super the luxe Belmond Grand Hibernian.

But yet again, there are talks to close the railway, as the Ennis to Gort part is not very much used. The Oranmore to Galway section, however, is the busiest section of all. Having travelled it myself, the trains are very packed, the car park is bursting out of its seams, and it really is the best way to travel into Galway city, where gridlock is rife.

Here is an article suggesting that busses would be much cheaper to run, and could possibly be ran more regularly. I think it would be interesting to do a study to find out if more trains are added at peak times going into Galway from Ennis/Gort, if people in South Galway would switch from using their car to using the train.

If anyone from Irish Rail is reading this, please do a trial! It may well turn out people are keen to avoid gridlock traffic. ( or maybe they don’t want to travel at all, and they just want to work from home, check out Grow remote!)

As for me, back to my lead, the librarian gave me – John Lawlor  – the son of the last station Master! The librarian passed on my number, and we met at Sullivan’s in Gort.

He tells me that his father was stationmaster in Ardrahan from 1957 to 1966. When the then station master in Gort – Jack Donovan – was promoted, his father requested a transfer to Gort. At the time both stations had the same status. The station house in Gort was less draughty and bigger, so it suited them better. Soon after his transfer, Ardrahan railway station was degraded. I was surprised to learn that until then, Ardrahan station was the largest station in Ireland transporting beet. This article describes the demise of the sugar industry in Ireland. Although not a recent article( 2016) may be a return of the sugar beet industry might be in sight?

As far John, he has stayed in the transport world and drives a mini-bus for the school run.

When I was talking to John, I realized I had never really seen the house at the Railway Station in Ardrahan, as it is a short stroll from the current platform. So I ventured out to have a look and had a lovely conversation with Marion who has been living at the house since the late eighties and made a great job to restore it! I even got a sneak peek inside:)

Did you know you can order your tickets online these days? Did you also know that if you plan ahead, you can get yourself a return from Gort to Dublin for less than 40 Euros. Book your ticket online at www.irishrail.ie  and collect them at any railway station!

Do you know where the Gort Railway Station is? Did you know it has ample free parking?

Did you know it even has an electric charger for cars?

When was the last time you used the train from Gort to Galway? If there were more regular trains, particularly in the morning, would you use the train? What do you think is a fair price for a one way/return ticket? I’d love to get your feedback!! 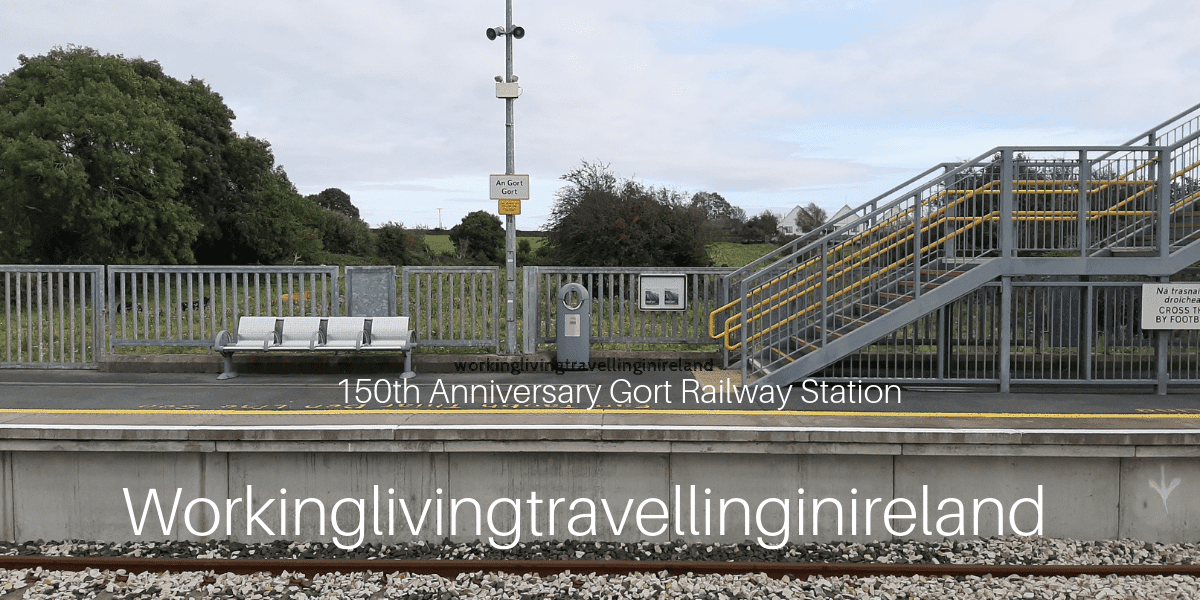 Mum, blogger, Belgian, linguist, living in Ireland since 1993. I take a keen interest in business,small business and technology, how it creates jobs opportunities in Ireland. This blog is about following the trends in job creation, where those jobs are advertised, and what's involved to make Ireland( like myself) your new home. I am based in the West of Ireland. Twitter: @ecotreasure FB: workinglivingtravellinginireland

Visiting the West of Ireland ? On a bud...