Another initiative I heard about on the Radio… I think it’s a great initiative, as it’s a good opportunity to get to you know your neighbour(s), especially if you are away at work during the day, and you may only see your neighbours the odd time when your cars are passing on the road. Or maybe you are at home, minding young children and you don’t know any other mum in the same situation. Or maybe you are new to the area!
I once organized a little get together for all the women on my street, which turned out a very enjoyable evening with food, drink and general chit chat, as interestingly enough, even the women that grew up here, didn’t know any of the younger women in the group, as the majority of younger women weren’t from the area( sometimes referred to as a blow in). Because I did that, I got to know my neighbours ( and they got to know me), which comes in handy if you have questions, such as where should I order my oil? Who can fix my lawnmower or what school should I send my child to?
The importance of knowing your neighbours was clear to me around the time of the floods (November last year), when some people were unable to get out of their houses and relied on neighbours to get their provisions or people’s houses were flooded and needed a place to stay or in the case of farmers, bring their cattle to higher ground or cattle that were locked in, bring them their fodder by boat/tractor. ( see pictures below).
So if you would like to organize a get to know your neighbour event follow this link to apply for a starterpack: http://www.knowyourneighbour.ie/get_a_pack or •E-mail info@knowyourneighbour.ie

•Text KYN followed by a space and their name and address to 51444. 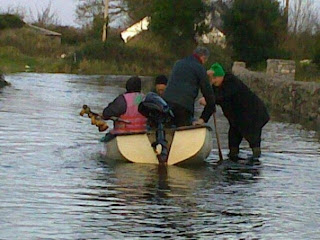