I admit, it’s been a while I dressed up, but I had great fun sourcing my Victorian clothes for the Picnic at The Kiltartan Gregory Museum in Co. Galway earlier today.

As I mentioned in my previous post , I wanted to go to the Picnic at Kiltartan Gregory Museum, and as they wanted people to dress up in Victorian clothes, I called into our local second hand store called Carecharityshop, who happened to have an across-the-board 1 Euro  sale, so I went in to  see if I could pick up a few pieces!

I found a hat, coat  and matching shoes that I think might have been from that era and Carie (who is the part-time manager of the shop) gave me an outfit she wore for the St- Patrick’s parade, so I was all set! 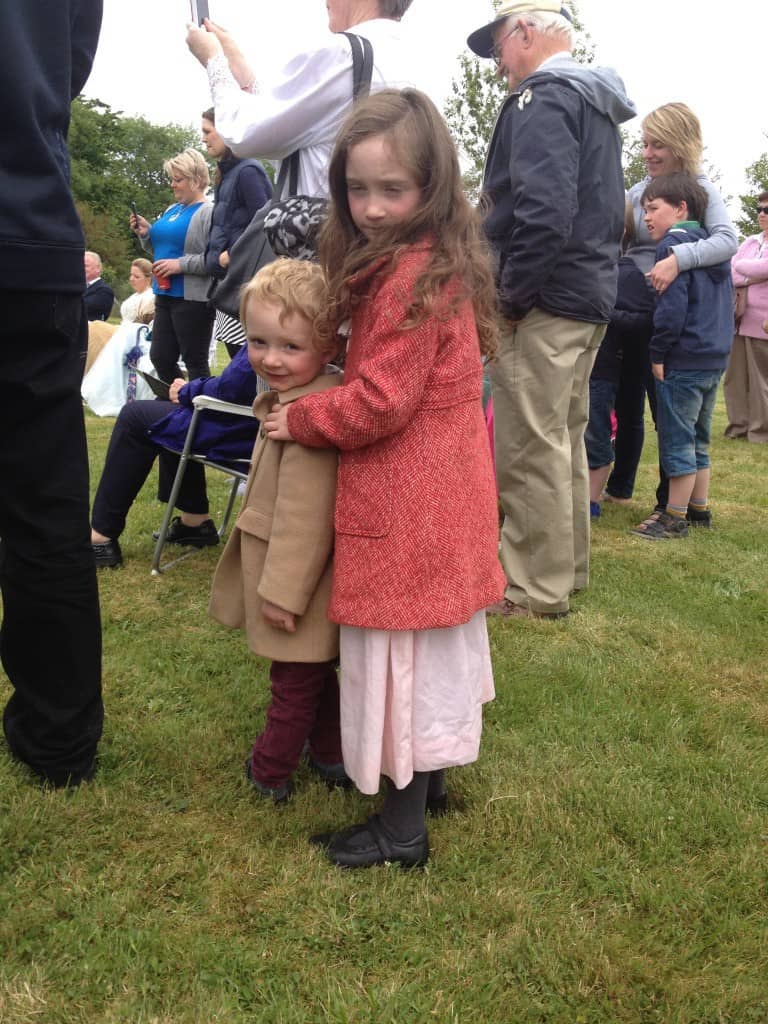 Joe and Bridget May Orford at the picnic at Kiltartan

I took my friend’s kids from the Dollytub along along to the picnic. (Take a look at her blog, I have been pestering her to write on her blog, and she’s finally doing it!!)Rueben didn’t want to be in the picture, but in the end he did show up (he’s the head popping up behind the wall!) Alexander insisted to wear his communion suit, hey, I guess it’s great to see he’s getting some wear out of it! 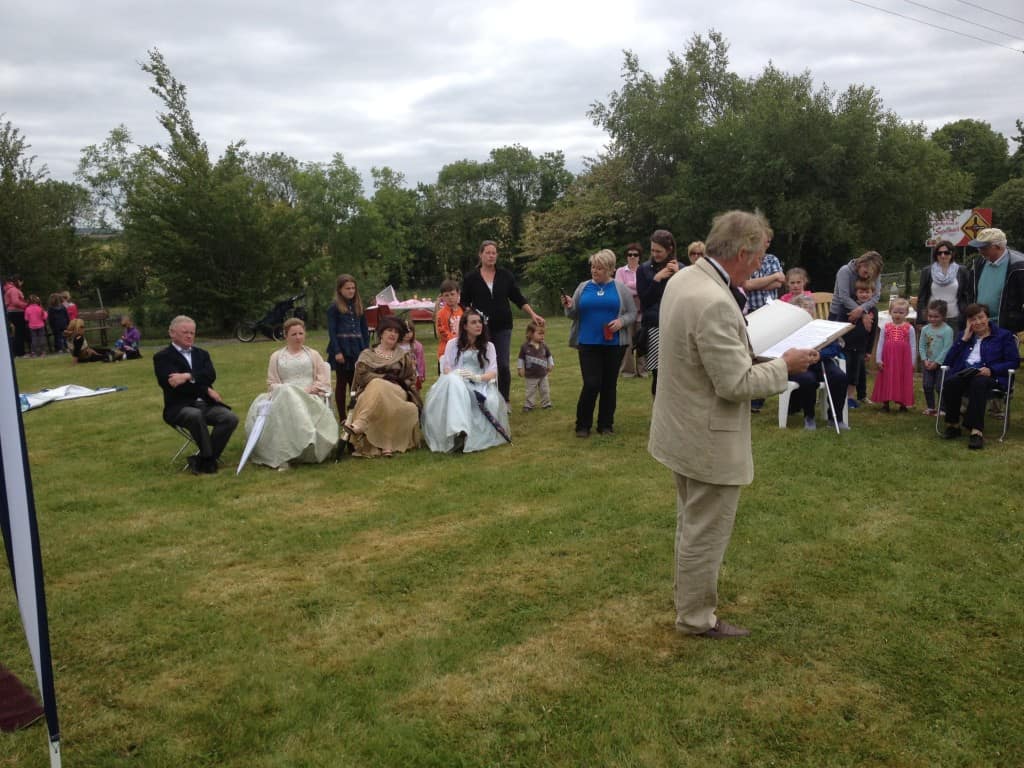 Check out the ladies to the left!

I then dropped off Alex to a birthday party, and made my way to the opening of Thoor Ballylee!! Yohoo!! We went to the auction which was fab, so I couldn’t wait to be at the official opening.

It was packed at the auction and I remember parking in a nearby field, this time it was much more packed and the field was full(!) so I ended up parking rather close to a stone wall.

We arrived just in time to see Yeats himself arrive on his horse( aka Colm Farrel, one of the local auctioneers), and he read ” Wandering Aengus” whilst sitting on the horse. As you can see we were in the front row! Luckily the horse behaved:) 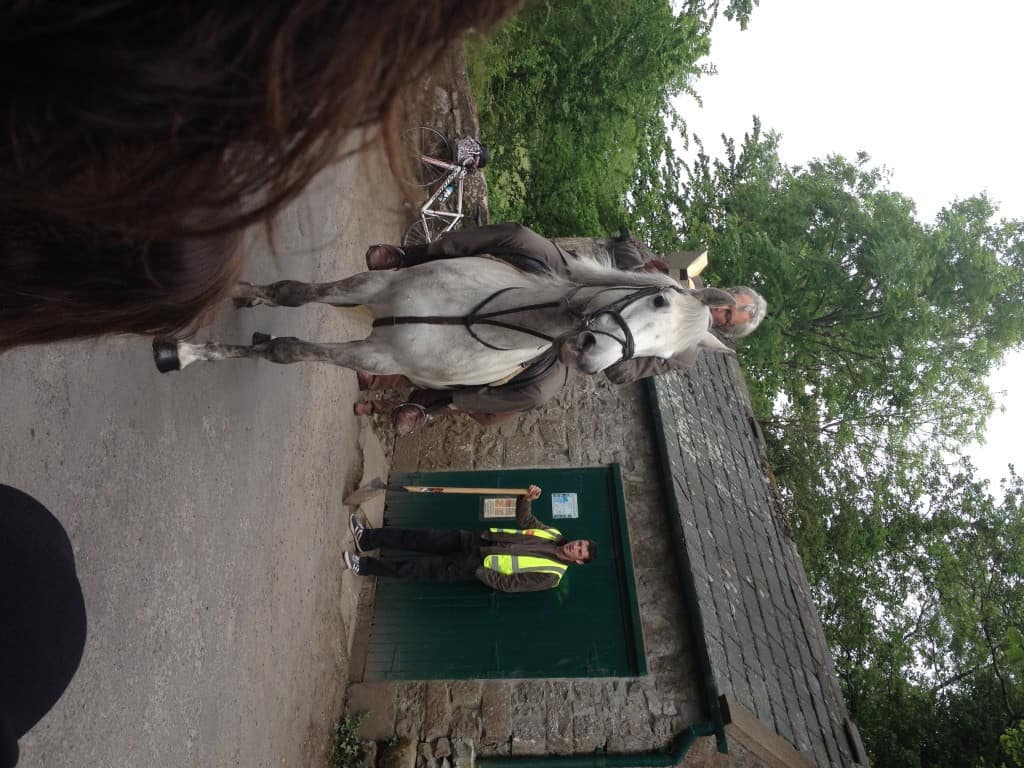 I WENT out to the hazel wood,
Because a fire was in my head,
And cut and peeled a hazel wand,
And hooked a berry to a thread;
And when white moths were on the wing,
And moth-like stars were flickering out,
I dropped the berry in a stream
And caught a little silver trout.
When I had laid it on the floor
I went to blow the fire aflame,
But something rustled on the floor,
And some one called me by my name:
It had become a glimmering girl
With apple blossom in her hair
Who called me by my name and ran
And faded through the brightening air.
Though I am old with wandering
Through hollow lands and hilly lands.
I will find out where she has gone,
And kiss her lips and take her hands;
And walk among long dappled grass,
And pluck till time and times are done
The silver apples of the moon,
The golden apples of the sun.

Big shout out to the Thoor Ballylee Society committee members, “dreamers” as Fidelma Healy Eames said, who kept pushing  and made it a reality that Thoor Ballylee would continue to exist and will be open again to the public again!

The reference to this quote was also touching:

“I have spread my dreams under your feet.
Tread softly because you tread on my dreams.”
― W.B. Yeats

The speech of Joseph Hassett, who donated a 31 ooo Euros to help the reopening of Thoor Ballylee referred to how Yeats was present, referring to the empty seat he(Yeats) was sitting on. But also how your children and grandchildren can visit Thoor Ballylee, which is a beautiful building where Yeats wrote many of his poems!

And then it was time to pick up Alex from his birthday party.

What  a great day! Big thank you to Kiltartan Gregory Museum and Thoor Ballylee Society!!