Check out my  visit to Scattery Island, which is located off the Clare Coast, just a few miles from Kilrush. For other  trips in Clare and Galway, check click here. 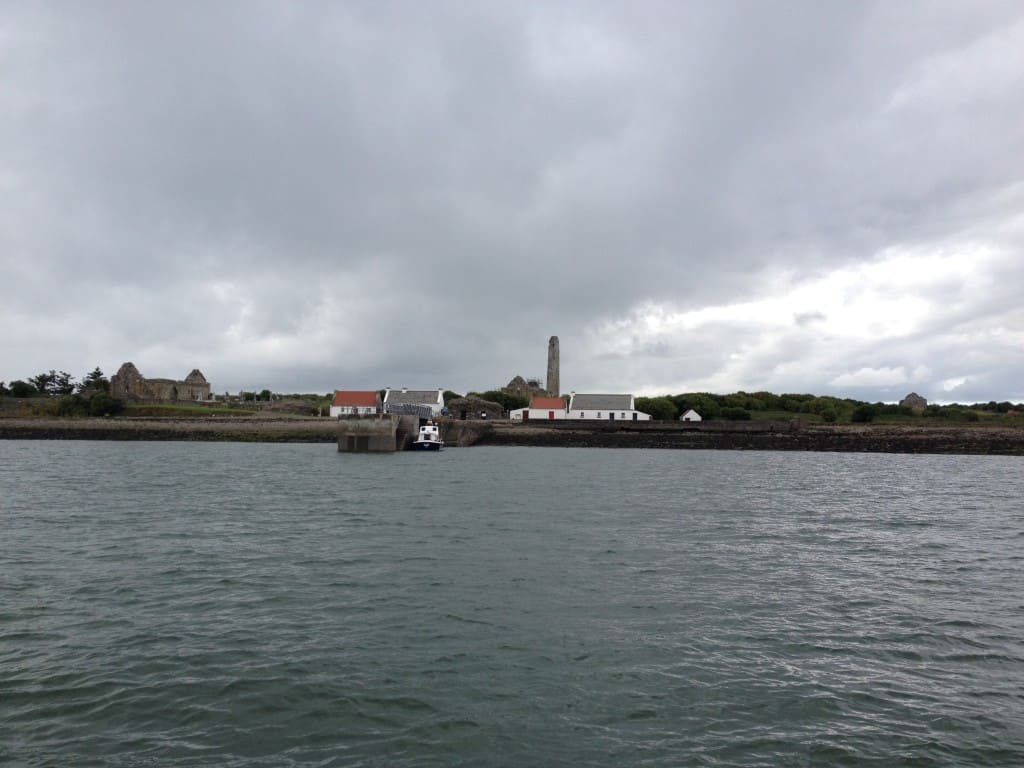 Living in Ireland, which is already an Island, it’s interesting to note that there are quite a few smaller islands of the West Coast. If island living can be challenging, it becomes much more challenging when you live off the coast of an already island.

I guess as a non-islander I am still fascinated by how people used to live on these smaller islands and learn more about how they lived, traded with other islanders, and how they made things work in often very difficult situations. ( Scattery was last inhabited in 1978)

How to get to Scattery Island from Gort

The below map shows you the quickest route from Gort, Co. Galway. to visit Scattery Island

You can also take the scenic route via Spanish point, but this will add half an hour to your journey.

What is a River Pilot?

As our guide explained, Scattery used to be the base for River Pilots, which would help boats a safe crossing through the Shannon River and Estuary.

The Windsor Castle of Liverpool

Our guide mentioned a story that really made a difference to Scattery Island, I found the detail here. In March 1843, pilots from Kilbaha boarded a deserted ghost ship, The Windsor Castle of Liverpool, which had left Bombay in June 1842. The pilots succeeded in bringing the vessel to Kilbaha using their canoes and a pilot hooker. They brought the boat to Scattery Roads and guarded her around the clock to prevent plunder. The pilots were offered compensation for their efforts, which they refused. After many months the High Court of Admiralty in Ireland awarded the pilots £5,000 plus their costs and expenses, the award being divided amongst 18 pilots and 16 assistants. In the 1840s Scattery was part of the estate of the Marquis of Conyngham whose son-in-law, Marcus Keane, acted as a land agent. Keane approached the compensated families and offered to sell them land on Scattery, an offer which many families took up, increasing the population of the island considerably.

The inhabitants of Scattery Island appear to have escaped the deaths and emigration, associated with nearby Kilrush, during the famine period. The total population of the island, including the soldiers, actually increased from 65 in 1841 to 99 in 1851 and to 139 in 1861, the numbers of houses in this period increased from 9 in 1841 to 24 in 1861. The memorial inscriptions on the gravestones do not show any deaths of islanders during the period 1845 to 1850. Perhaps a combination of fishing and additional shipping, due to famine imports and emigration, provided good employment for the pilots at this time and helped them to survive.[11]

To find out more detail about the island and its history, check out this Wikepedia Article.

Scattery Island, or “Inish Cathaigh” is located approximately one mile off Kilrush, Scattery Island is home to a monastic settlement founded in the early 6th century by St. Senan who was born locally.

There are the ruins of six churches ( or possibly even 7) and one of the highest Round Towers in Ireland, 120 feet high, with is unusual feature of its door at ground level. 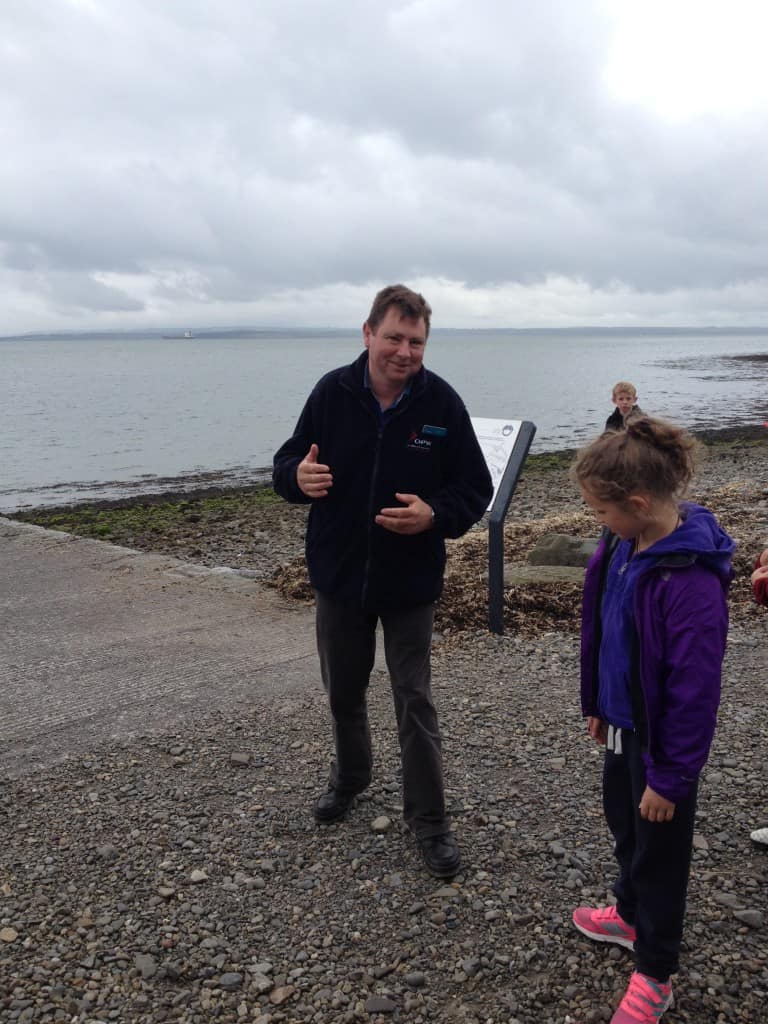 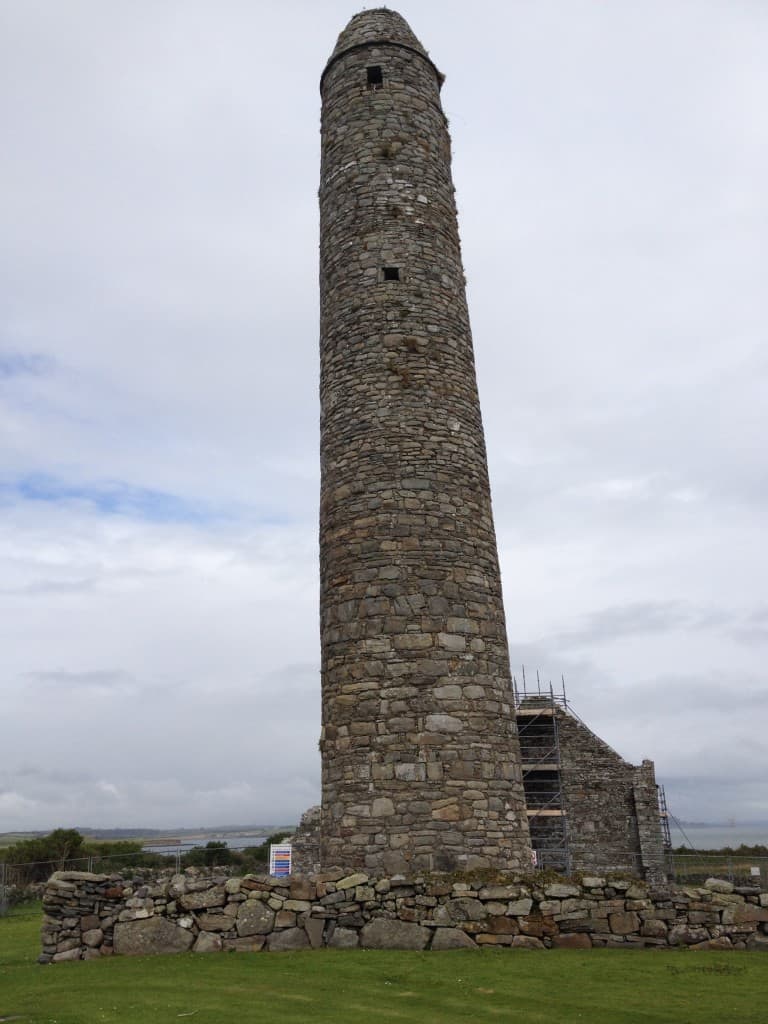 Scattery has had many invasions down through the centuries; the Vikings invaded during the early 9th century but Brian Boru later recaptured the island.  It is believed that Scattery is a derivation of the Norse word for treasure, which is Scatty. So maybe we really should call it Island of Treasures or Treasure Island?

The main church on the island is Teampall Naomh Mhuire (Cathedral of Saint Mary), situated next to the round tower.  Scattery for a time in the 12th century administered to a diocese. 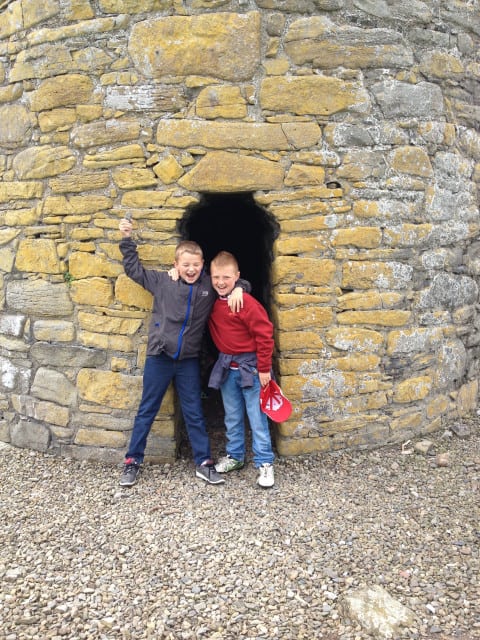 Boys at the foot of the roundtower, Scattery Island 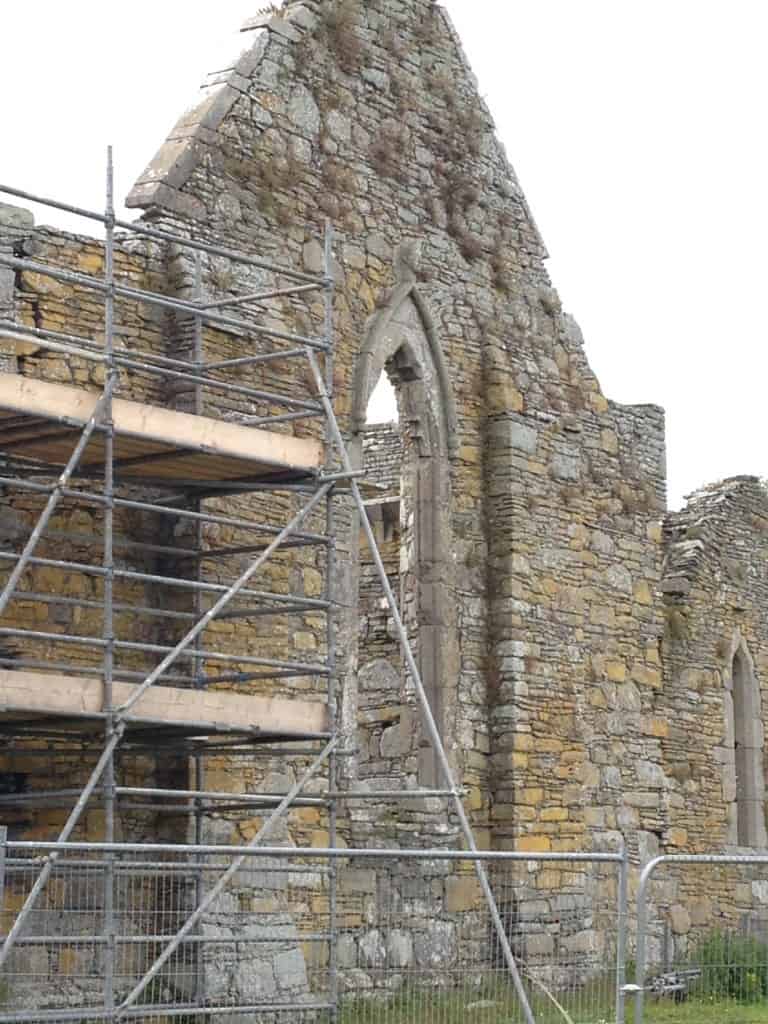 There is an effigy of a bishop’s head on the outside of the east window of the Cathedral believed to be that of St. Senan.

The holy well, called Tobar Sinean, beside the round tower was of great reverence and respect by the islanders.  It was also associated with a pattern held on St. Senan’s Feast Day on 8th March. 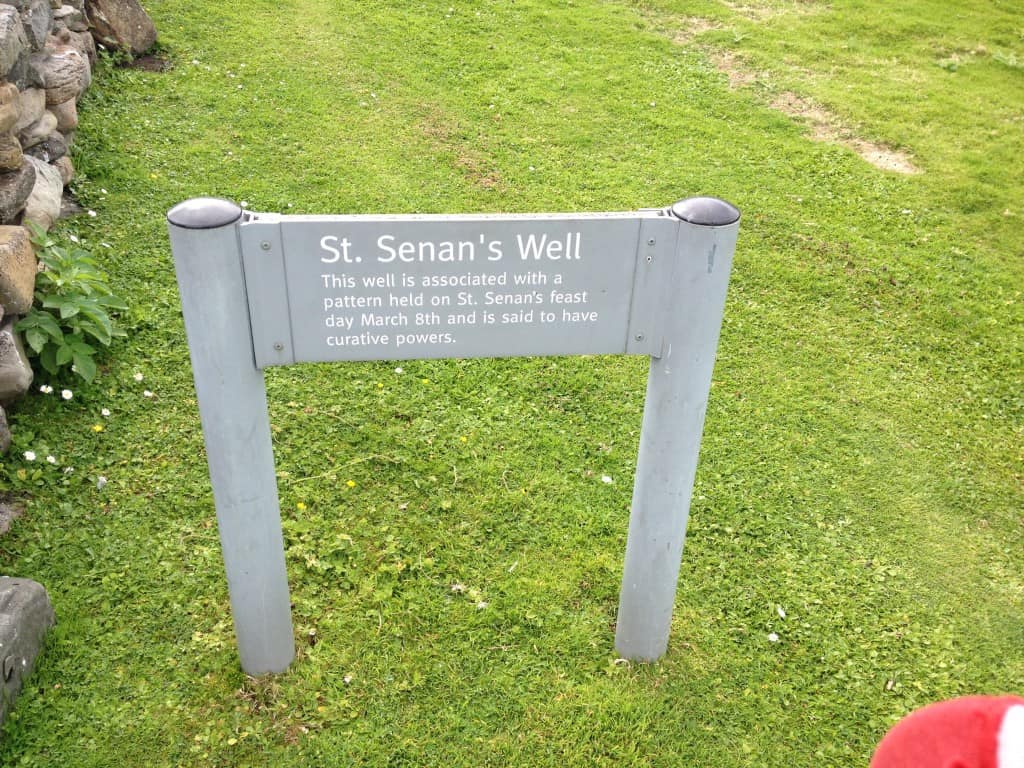 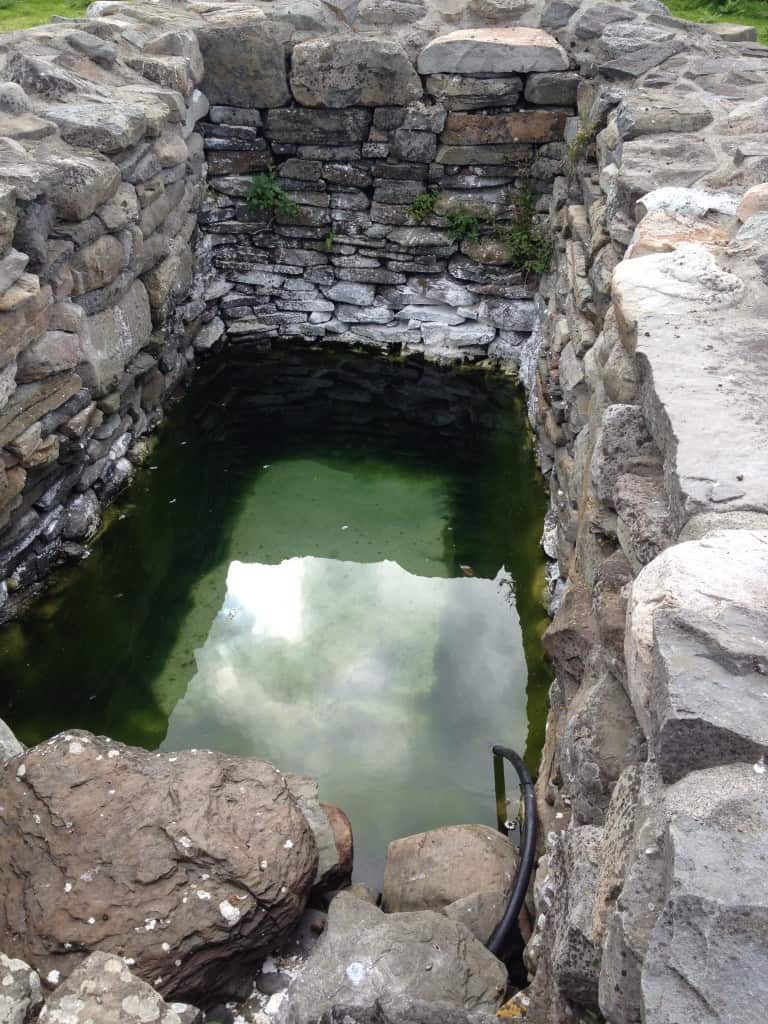 St. Senan is believed to have died in the year 544 and is reputed to be buried in St. Senan’s Bed beside Temple Senan a small 12th Century Romanesque church. 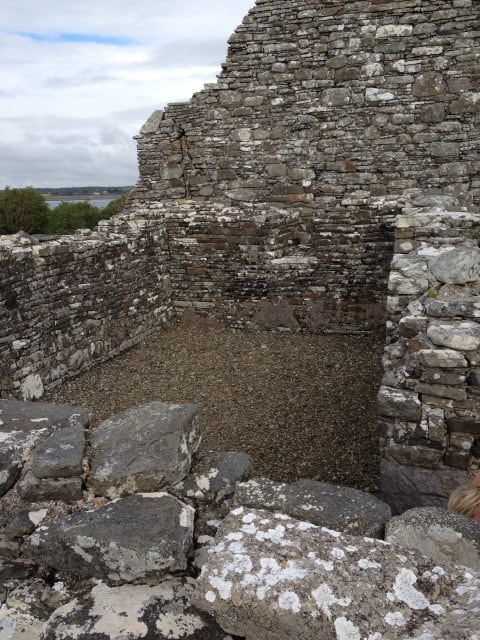 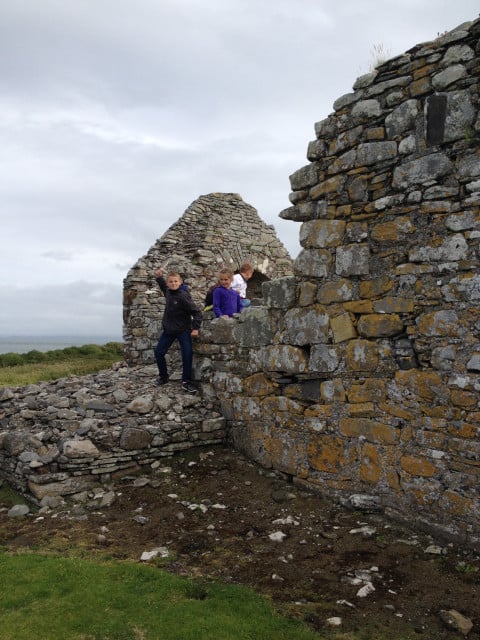 An exhibition of the history of the island is housed in the visitor reception building, which is situated near the pier.

I particularly enjoyed the church situated at the highest point of the Island, I loved the structure/colour of the remainder of the church, and of course, the beautiful view, overlooking the lighthouse. 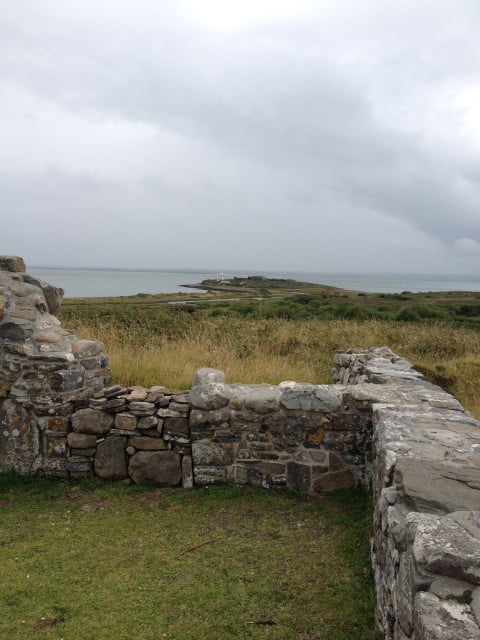 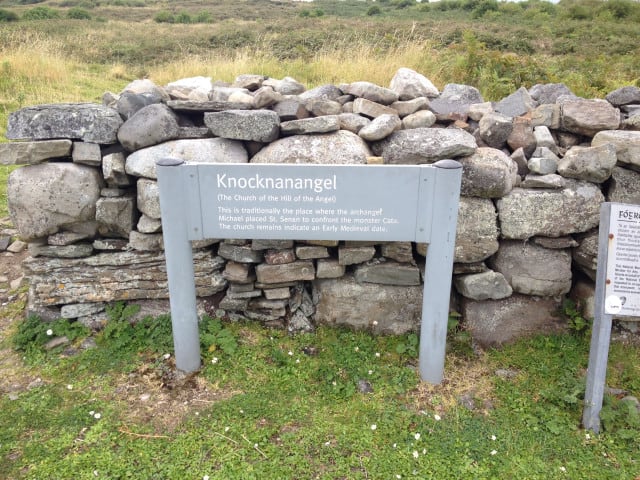 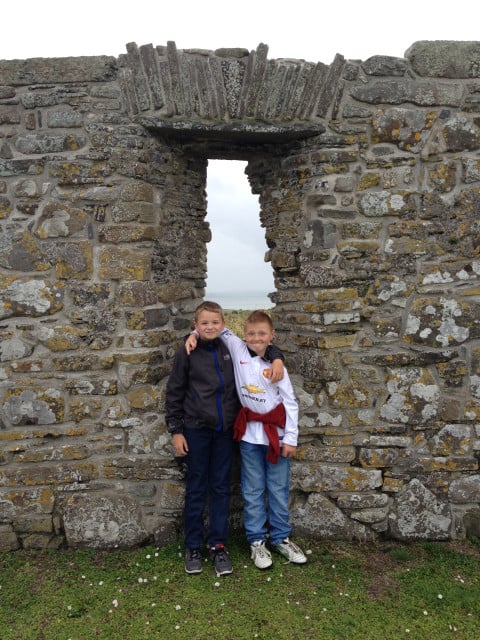 We left Kilrush harbour at around 15:00 with the OPW guides on board, and left the Island at around 17:30.