We waved 2015 farewell and welcomed 2016! My best wishes to you and yours for 2016! Congrats to those that are still sticking with their new year’s resolutions, commiseration to those that have already lapsed, oh well, you are still a good person:).

I am back to work, and during breakfast my eldest son asked me if I knew the slogan of the Ardrahan hurlers, and I said I didn’t. He was very quick to remind me that it is: We are blue , we are white, we are dynamite!

I choose the above title, as I thought it symbolizes the spirit of the people in this area.

We tend to have storms in the winter, and this year we have been “treated” to a few too many ! I wrote about #Stormdesmond in a previous post  and since #stormdesmond we have had #stormeve and the most recent one was #stormfrank, and unfortunately #stormfrank was the drop that made the bucket overflow, quite literally, as many were forced to leave their houses and farms due to flooding.

We are no strangers to flooding, as some areas (traditionally) get flooded, and you’ll see lakes that aren’t there during the summer. The area of Labane/Peterswell/Kiltartan was badly affected by floods in 2009, and I will never forget the community spirit I saw in 2009. People were marooned in, kids couldn’t go to schools, animals were separated from their owners, and couldn’t be fed. I saw people get together, assist each other to bring food and supplies to those marooned in, offer tractor rides, and get together to pump water out of houses. 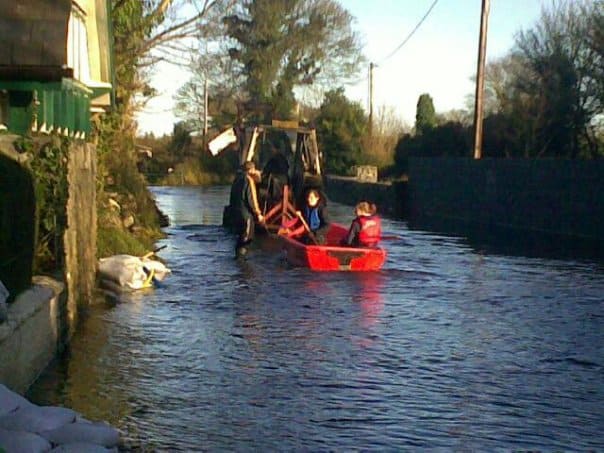 It was one of the most frightening experiences I ever went through,  especially when the road that connects us with the main road was flooded and we were effectively marooned in, the road at Kiltartan was flooded and Gort was not passable. My husband wasn’t able to get to work, as all main roads were flooded.

Fast forward to 2016, and unfortunately the same is happening. I took below video at the same place.

A local aerial photographer Sean Brady took following footage, to give you an idea of the extend of the flooding.

A number of dignitaries visited Labane/Ardrahan today, including the President of Ireland, Michael D Higgins. Our youngest son was all set to meet him and get his signature, and his wish got fulfilled, and my husband was interviewed for the radio.

Glad to see that some local(rival) politicians  Ciaran Cannon and Joe Byrne got together to dig a channel to ease some of the flooding in the Kiltartan area , so water can flow into the sea at Kinvara. You can check out the picture and video here.